Today I have a very special post, I got to chat to Megan Jacobson author of Yellow and her latest release The Build Up Season, I got to chat about her inspirations to write and also who her influences for her latest protagonist Illiad Piper. Find below Meg’s amazing answers to my questions and I hope you enjoy!

What was the inspiration for The Build-Up Season?

I work at the ABC in TV news production so I’m exposed to a lot of confronting things daily, but the Rosie Batty story deeply affected me, and from then on I was hyper aware of the issue of domestic violence. Later, we did a story about how women between the ages of 18-23 were twice as likely as their older peers to experience domestic violence, and this struck me as significant because I’d always thought it was predominantly an issue for older women with kids. This is what spurred me to begin writing the book, because I wanted to show young people how the violence begins.

In my early 20s I was in a relationship which, looking back, was abusive, though I didn’t realise it at the time because I hadn’t had enough experience to identify what a healthy relationship should look like. Though I was pushed so I fell, and he’d punch the wall next to my head, I didn’t define it as abuse because he never actually punched me. Punching was the only domestic violence narrative I’d ever heard. While developing The Build-Up Season I spoke to several friends about their early relationships, and I was struck by how many of them had been in unhealthy relationships as well, without realising it at the time. It’s not as black as white as the Hollywood depictions of domestic violence, and the people who stay don’t always stay out of fear, often, they stay because they love their partner, and most of the time the perpetrators aren’t always violent, they can be sweet and kind as well. Also, we’re raised on a diet of Twilight-esque depictions of insta-love and codependent relationships. We’re taught that it’s romantic if the guy gets angry when you talk to other people. I wanted to play into those tropes, then flip them on their heads and tell young women – nope – not romantic – not cool. Troy is the extreme conclusion to abusive behaviours, but I wanted to mostly show young people what the early warning signs are, the ones that ‘build up’ to violence, and what to look out for.

How long did it take you to write The Build-Up Season?

The first draft took me about nine months, written predominantly in two month-long bursts overseas, but the editing process took me over a year, with major structural upheavals. I was editing it until the day before it went to print!

Did you have any particular influences for Illiad Piper?

Yes – I was obsessed with the video clips of Lorde while I was writing. I’d watch ‘Royals’ and ‘Tennis Court’ on repeat and I loved the way Lorde came across as so fierce and defiant and simultaneously so vulnerable. I really wanted to channel those emotions when I wrote, so whenever I was stuck I’d watch those two video clips and try to write with the same vibe.

I was also influenced by one of my all-time favourite characters, Rick Blaine from the movie ‘Casablanca’. I love how complex he is – how he’s seemingly unfeeling, wearing a tough exterior to hide the hurt inside. I love how he tells the world repeatedly ‘I stick my neck out for nobody’ and yet, you see through his actions, again and again he totally sticks his neck out for others in multiple situations. I wanted Ily to be like that.

Was it different to write The Build-Up Season, than it was to write Yellow? If so, how?

It was a little bit – Yellow was the first book I’d ever written, so I was second guessing myself the whole time, wondering whether I could actually write a whole book, and if so, if anyone would ever want to read it. With The Build-Up Season I had a bit more confidence – whenever I was stuck and didn’t think I could finish, I remembered I had finished one before, so that helped me keep on going. Also, Kirra’s so shy, so writing her was sort of like seeing a small girl in the shadows, and I sort of knew she wanted me to follow. It was a bit tip-toe and dream-like. Ily on the other hand ran up to me and grabbed me tight and stuck her tongue out and skipped forward and pulled me along like I had no say. I actually had another story I was going to write, but Ily wouldn’t let me. She’s pretty headstrong.

What inspired the lifestyle of Illiad and her family?

I grew up in Darwin, so I wanted to set it there, and my childhood friend had a beautiful property in the rural area that I roughly drew upon to use as the setting for Ily’s home. I’m actually a yoga-loving vegetarian who was incredibly into crystals and tarot when I was a teen, so I drew heavily on that while writing Eve. I’m basically mocking myself a lot when writing her. The dishes that Ily hates so much are actually my favourite! Also there’s a big wellness community where I was writing in Ubud, and I’d go along to yoga and meditation classes. While a lot of those new age teachings have real, proven benefits, there’s a few that are scientifically and ethically dubious. I was really interested in why people are drawn to unconventional teachings, and through that I wanted to explore the different methods people use to heal or draw strength from.

Huge thanks to Megan for answering my questions for today’s post, also to Penguin for organising this blog tour! I will link all the other blog tour days as they are posted if you would like to check out any of the others posts too! 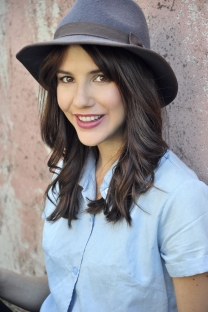